Targets are modules that can create image of reference patterns needed when testing electro-optical imaging systems. The targets manufactured by Inframet can be divided into two groups:

The passive targets need to be irradiated by a uniform beam of light generated by blackbodies or calibrated light sources in order to create images of reference image patterns. These targets are typically small modules of bigger test systems and are located at collimator focal plane. The passive targets do not need electric power for proper work. These are typically small size targets ( diameter below 100mm for IR targets/ VIS targets and below 300mm for case of NV targets) that are used as part of big modular test systems manufactured by Inframet (DT, TAIM, TVT, MS). They are typically inserted into holes of a rotary wheel.  Image of the passive target is projected by a collimator.

The active targets create images of reference image patterns due to their own thermal radiation or due to reflected light emitted by sources typically met in human environment. These targets are typically big stand alone modules (dimensions from 500mm to 3000mm)  that need electric power for proper work. The active targets are  typically used as stand alone blocks that are directly seen by tested EO imagers.  These target are popular solution for testing fusion algorithms of fused  imagers or as resolution targets of thermal imagers/VIS-NIR cameras.  FUT series targets are an example of this type of targets. 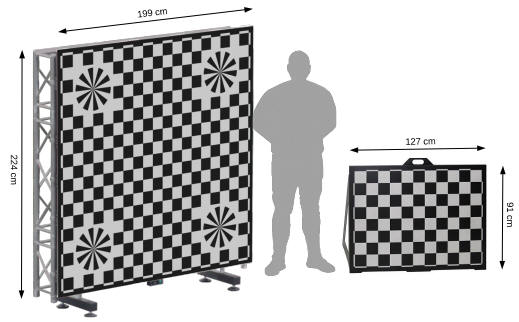 The passive targets can be divided according to application on three groups: