EXIR-3 system is build from a set of three blocks: CHI translucent imager chamber, CHP projector chamber and ADT athermal image projector.The tested imager is inserted to the CHI imager chamber. The ADT athermal image projector is inserted to the CHP projector chamber. The tested imager can see athermal projector via the translucent window in the first chamber and hole in the second chamber. This concept enable independent regulation of both imager ambient temperature and background temperature. It is the first reported test system in the world of such simulation capabilities.

All three test system enable measurement of all important parameters of thermal imagers at variable work conditions. EXIR-1 and EXIR-2 enable simulation of most typical work  scenarios when imager ambient temperature and target background temperature  are approximately equal. Only in case of EXIR-3  system both temperatures can be regulated fully independently in range from about -40C to at least +60C and all possible work scenarios can be simulated (Table 1). 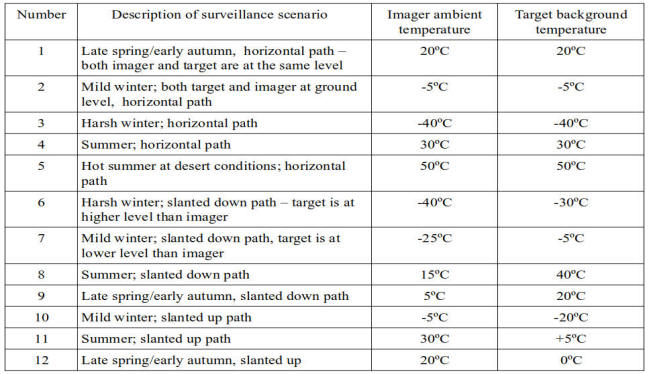 The test systems presented in this section (EXIR-1, EXIR-2, EXIR-3)  have been basically developed for testing thermal imagers operating at MWIR/LWIR spectral bands. However, they can be modified (new radiation source and broadband window ) to enable testing VIS-NIR cameras, SWIR imagers or multi-sensor systems. Testing the latter systems is of particular importance because these test systems enable not only to measure image quality but also to measure boresight errors at simulated real work conditions.